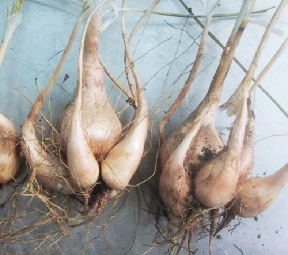 Jammu and Kashmir Medicinal Plants Introduction Centre,  has setup a first of its kind Saffron Multiplication Seed Corms (SMSC) Nursery over 5 hectares of land at Seed Multiplication Centre  in Kashmir. The Saffron nursery was inspected by Minister for Agriculture along with Chairperson Jammu and Kashmir Medicinal Plants Introduction Centre Sheikh Gulzaar. An official statement said that the nursery has been developed on scientific basis over an area of 5 hectares and 3000 kg of Healthy fifth calibar Saffron  corms planted in it that would in turn produce three times more Saffron seed corms for its  distribution among Saffron farmers under saffron Mission. The Jammu and Kashmir Medicinal Plants Introduction Centre  has adopted two technologies in the nursery for seed multiplication of Saffron Seed corms, one is traditional which is mainly used in Kareves of Pampore and second is Spanish technology.