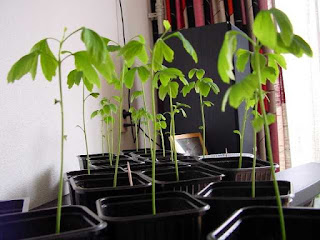 This refers to Ginkgo which is in the worldwide  news. Ginkgo biloba is one of the oldest living tree species and its leaves are among the most extensively studied botanicals in use today. In Europe and the United States, Ginkgo supplements are among the best-selling herbal medications. It consistently ranks as a top medicine prescribed in France and Germany.

Ginkgo has been used in traditional medicine to treat circulatory disorders and enhance memory. Scientific studies throughout the years have found evidence to support these uses. http://chenabindustries.blogspot.com/2010/09/ginkgo-biloba-seedsnutslavesplants-for.html
Although not all studies agree, ginkgo may be especially effective in treating dementia (including Alzheimer’s disease) and intermittent claudication (poor circulation in the legs). It also shows promise for enhancing memory in older adults. Laboratory studies have shown that ginkgo improves blood circulation by dilating blood vessels and reducing the stickiness of blood platelets.

It is our prestige to have Jammu and Kashmir Medicinal Plants Introduction Centre-JKMPIC introduces 500 Ginkgo biloba plants . Now both its male and female plants have been cultivated. As this plant is in high demand throughout world, we can cultivate it on large scale and can make the name of your sate not only in India but all over the world.
Ginkgo biloba planting material/seeds/leafs/nuts available at:
Chenab Industries Kashmir-CIK
POB: 667 GPO Srinagar SGR JK 190001
Ph: 01933-223705
Mob: 09858986794
e-mail: cikashmir@gmail.com
home: http://chenabindustries.blogspot.com
Posted by Jammu and Kashmir Medicinal Plants Introduction Centre at 7:10 PM