Helianthus annuus, the common sunflower, is a large annual forb of the genus Helianthus grown as a crop for its edible oil and edible fruits. This sunflower species is also used as bird food, as livestock forage, and in some industrial applications.


Kiwi is mostly grown in the mid hills of Himachal Pradesh, Uttar Pradesh, J & K, Sikkim, Meghalaya, Arunachal Pradesh,Karnataka,Uttarakhand  and Kerala.  Having been very newly introduced in the country estimates of area and production have not yet become available.

Probably because they aren't mostly grown locally in India. They have to be imported. Import means taxes, more transportation charge, and higher risk of damage. All this leads to higher prices.

Kiwi vine starts bearing at the age of 4-5 years while the commercial production starts at the age of 7-8 years. The fruits mature earlier at lower altitude and later at high altitudes because of variation in temperature. Large sized berries are harvested first while smaller ones are allowed to increase in size. After harvesting, the fruits are rubbed with a coarse cloth to remove stiff hairs found on their surface. Hard fruits are transported to the market. Subsequently, they lose their firmness in two weeks and become edible. Kiwi plant

Abbott : This is an early flowering and early maturing cultivar. The oblong, medium sized, fruits are covered with dense hairs. They are very sweet in taste with lower ascorbic acid content and medium titratable acidity.

Allison : Fruits resemble those of Abbott, except that these are slightly broader in proportion to its length. The petals of its flowers are overlapping and crimped along with margins. It is an early ripening, heavy bearer and sweet in taste. Ascorbic acid and titratable acidity are on the lower side. This variety is most suited for Himachal Pradesh.

Bruno : This cultivar requires comparatively less chilling period. The fruits are tapering in shape towards the stem end. They are longest among all the cultivars. The fruits is dark brown having very dense, short and bristly hair, highest in ascorbic acid and titratable acidity. The bearing is very heavy.

Hayward : Most popular cultivar or the world, Hayward is comparatively shy bearer with a tendency of biennial bearing. The fruit is broad and flat, being much wider in relation to length. It is superior in flavour with high sugar and ascorbic acid content. It requires comparatively more chilling hours.

Monty : It is a late flowering cultivar but fruit maturity is not late. The fruits are oblong, resembling those of Abbot and Allison. Being a highly prolific bearer cultivar, sometimes it needs hand thinning for obtaining good sized fruits. The fruit is somewhat wider towards blossom end with higher acidity and medium sugar content.

Tomuri : It is a good pollenizer for Hayward and Monty, the late flowering kiwis. Flowers appear usually in groups of 5. Allison : It is also used for pollenizing different cultivars. 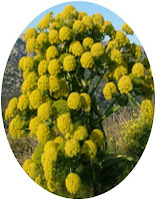 The species are distributed from the Mediterranean region to Central Asia. In Jammu and Kashmir it is grown in Kashmir .The major supply of asafoetida to India is from Afghanistan and Iran.

Hawthorn is used for diseases of the heart and blood vessels such as congestive heart failure (CHF), chest pain, and irregular heartbeat. It is also used to treat both low blood pressure and high blood pressure, “hardening of the arteries” (atherosclerosis), and high cholesterol.

Posted by Jammu and Kashmir Medicinal Plants Introduction Centre at 10:36 AM

The dried fruit is a powerful local stimulant with no narcotic effect, it is most useful in atony of the intestines and stomach.

Castanea sativa, or sweet chestnut, is a species of flowering plant in the family Fagaceae, native to Europe and Asia Minor, and widely cultivated throughout the temperate world.

Posted by Jammu and Kashmir Medicinal Plants Introduction Centre at 8:38 AM

Atropa belladonna or Atropa bella-donna, commonly known as belladonna or deadly nightshade, is a perennial herbaceous plant in the family Solanaceae, native to Europe, North Africa, Western Asia, and some parts of Canada and the Kashmir Himalayan regions. The foliage and berries are extremely toxic, containing tropane alkaloids.

Posted by Jammu and Kashmir Medicinal Plants Introduction Centre at 8:48 AM

A place to record all the plants I find.....

Crataegus commonly called hawthorn, thornapple, May-apple whitethorn, or hawberry, is a large genus of shrubs and trees in the family Rosaceae, native to temperate regions of the Kashmir, Europe, Asia and North America.

Posted by Jammu and Kashmir Medicinal Plants Introduction Centre at 7:54 AM