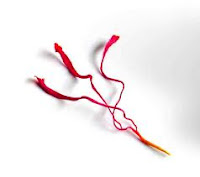 Breast cancer-related effects of eating saffron
Both saffron and crocin have been found to suppress DNA damage in a dose dependent manner in the livers, lungs, kidneys, and spleens of laboratory mice. Saffron has been shown to inhibit carcinogen-induced skin carcinoma in mice and to have cytotoxic action against human leukemia cell lines. Saffron also has been shown to cause cell death in HeLa and HepG2 liver cancer cells and TCC 5637 transitional cell carcinoma cells. Saffron extract and its constituent, crocin, have been shown to significantly inhibit the growth of colorectal cancer cells while not harming normal cells. Crocetin, a major carotenoid component of saffron, has been shown to have significant antiproliferative and proapoptic effects in pancreatic cancer cells in the laboratory and in laboratory mice. Saffron extract has been shown to have dose-dependent inhibitory effects on the proliferation of human MCF-7 and MDA-MB-231 breast cancer cells. Saffron has been found to greatly inhibit chemotherapy-induced cellular DNA damage. However, there is some evidence that saffron could be toxic at very high doses and we recommend consuming saffron as a spice and not taking saffron tablets.

Additional comments
Saffron is hand picked and hand processed, which is one reason for its high market price. Saffron is grown primarily in Iran, but it is also grown in Spain, Portugal, Italy, Kashmir and some parts of North Africa. Much of the Iranian production is redistributed through Spain. Saffron grown in these regions generally is grown without using pesticides. China is also beginning to produce saffron.

Meadow saffron (Colchicum autumnale), also known as wild saffron, Autumn crocus, or colchicum, is an unrelated and poisonous plant that should not be confused with saffron and is to be avoided. It can cause thirst, pain, diarrhea, weakness, vomiting, kidney failure, coma, and death from respiratory failure. Diluted fractions of meadow saffron are sometimes used in herbal remedies for gout and arthritis.

Saffron might interfere with Warfarin (coumadin) and other blood-thinning therapy since it has been shown to reduce platelet aggregation and thrombosis formation.

Selected breast cancer studies
Flavonoids, Proanthocyanidins, and Cancer Risk: A Network of Case-Control Studies From Italy Nutrition and Cancer, October 2010
The present meta-analysis was designed to investigate the associations between dietary intake of flavonoids and proanthocyanidins and risks of various types of cancer. The meta-analysis analyzed data from multiple Italian case-control studies including approximately 10,000 incident, histologically confirmed cases of selected cancers and more than 16,000 cancer-free controls. Multiple logistic regression models were used to calculate odds ratios (ORs) for the highest compared to the lowest quintiles (fifths) of consumption of six classes of flavonoids and proanthocyanidins. Total intakes of flavonoids, flavanones, and flavonols were found to be inversely related to oral and laryngeal cancers (OR = 0.56 (oral cancer) and OR = 0.60 (laryngeal cancer) for total flavonoids; 0.51 (oral) and 0.60 (laryngeal) for flavanones; and 0.62 (oral) and 0.32 (laryngeal) for flavonols). Intake of flavanols was also found to be inversely related to laryngeal cancer (OR = 0.64), whereas intake of flavanones was inversely related to esophageal cancer (OR = 0.38). Reduced risk of colorectal cancer was associated with high intake of anthocyanidins (OR = 0.67), flavonols (OR = 0.64), flavones (OR = 0.78), and isoflavones (OR = 0.76). Inverse associations were also found between proanthocyanidins and colorectal cancer, especially for proanthocyanidins with a higher degree of polymerization (OR = 0.69 for ≥ 10 mers). No association between flavonoids and prostate cancer was found. A reduction in risk of breast cancer was found for high dietary intake of flavones (OR = 0.81) and flavonols (OR = 0.80). Common flavones include apigenin and luteolin (tricin is another flavone found primarily in brown rice). Common flavonols include quercetin, kaempferol and fisetin. Flavonols (OR = 0.63) and isoflavones (OR = 0.51) were found to be inversely associated with risk of ovarian cancer, whereas flavonols (OR = 0.69) and flavones (OR = 0.68) were inversely associated with renal cancer.

Therapeutics, March 2009
The present study was designed to determine whether crocetin, a unique carotenoid found in saffron, significantly affects pancreatic cancer growth. Crocetin was found to inhibit proliferation of MIA-PaCa-2 human pancreatic cancer cells. Crocetin also was found to alter the cell cycle proteins Cdc-2, Cdc-25C, and Cyclin-B1 and epidermal growth factor receptor, inhibiting proliferation. In vivo studies also were performed. Pancreatic cancer cells were injected into the right hind legs of athymic nude mice and crocetin was given orally to the mice after the development of a palpable tumor. Significant regression in tumor growth (with inhibition of proliferation) was found in the crocetin-treated animals compared to the control animals. The authors conclude that crocetin stimulated significant apoptosis in both in vitro pancreatic cancer cells and in vivo mice tumors.

Study of cytotoxic and apoptogenic properties of saffron extract in human cancer cell lines Food and Chemical Toxicology, November 2008
The present study was designed to evaluate the cytotoxic effect of saffron extract in HepG2 and HeLa liver cancer cell lines. Malignant liver cancer cells and non-malignant cells were cultured and incubated with varying concentrations of an ethanolic saffron extract. Saffron was shown to decrease cell viability in malignant cells in a dose- and time-dependent manner. Saffron also induced a sub-G1 peak in the flow cytometry histogram of saffron-treated cells compared to the controls, indicating apoptotic cell death was involved. This toxicity was found to be independent of ROS production. The authors conclude that saffron can cause cell death in HeLa and HepG2 liver cancer cells, and that apoptosis or programmed cell death plays an important role in this process.

Inhibition of breast cancer cell proliferation by style constituents of different Crocus species Anticancer Research, January 2007
Among the different species of Crocus, only the styles of Crocus Sativus L. have been studied extensively, since these constitute the well-known spice saffron. Saffron is widely used in Mediterranean, Indian and Chinese cuisine. In the present study, hydrophilic carotenoids in the styles of three other Crocuses endemic to Greece (C. boryi ssp. tournefortii, C. boryi ssp. boryi, and C. niveus) were discovered and reported on for the first time. Incubation of MCF-7 and MDA-MB-231 breast cancer cells for 48 hours with varying concentrations of extracts of all four styles was found to have a dose-dependent inhibitory effect on cell proliferation. The antiproliferative effect did not appear to be estrogen related. Studies on the effect of trans-crocin-4 (the main carotenoid constituent of C. sativus styles, digentibiosylester of crocetin), crocetin and safranal showed that the antiproliferative effect was attributable to crocin irrespective of the degree of glycosylation.

Subacute Toxicity of Crocus Sativus L. (Saffron) Stigma Ethanolic Extract in Rats American Journal of Pharmacology and Toxicology, 2007
The present study was designed to evaluate the possible toxic effects of an extract of Crocus sativus L. stigma on liver, kidney and selected hematological parameters in rats. Establishing the safety of saffron (Crocus sativus L.) is important since the medicinal properties attributed to it are extensive. Wistar rats were assigned to four groups of eight. The first group was designated the control. Groups 2, 3 and 4 were treated with an ethanolic extract of saffron in doses of 0.35, 0.70 and 1.05 g per kg, respectively, for two weeks. The body weights of the rats were measured on the first, seventh and final days of the study. Blood-related tests performed on the rats included total RBC count, total WBC count, Hb, %HCT, MCH, MCV and MCHC. Biochemical and serum profile tests included ALT, AST, urea, uric acid and creatinine. Tissue specimens of the rat livers and kidneys were also examined histologically. The extract was found to result in significant reductions in Hb and HCT levels and total RBC count, without a dose-dependent relationship. However, significant dose-dependent increases in total WBC count, ALT, AST, urea, uric acid and creatinine were found in extract-treated rats. Mild to severe liver and kidney tissue injuries were observe microscopically, supporting the biochemical analysis. The authors conclude that extract of Crocus sativus L. stigma is toxic in high doses.

Protective effect of saffron (Crocus sativus L.) aqueous extract against genetic damage induced by anti-tumor agents in mice Human & Experimental Toxicology, February 2006
The genotoxic potential of chemotherapy drugs limits their efficacy in the treatment of cancers. This study was designed to evaluate the chemoprotective potential of saffron against the toxicity of three well-known chemotherapy drugs, cisplatin, cyclophosphamide and mitomycin-C, using comet assay. Three doses of saffron (20, 40 and 80 mg/kg of body weight) were orally administered to mice for five days prior to dosing with the drugs under investigation. Pre-treatment with saffron was found to greatly inhibit chemotherapy drug-induced cellular DNA damage (i.e., strand breaks). The authors conclude that, together with previous study results, the findings suggest a potential role for saffron as an adjuvant in chemotherapeutic applications.
Sources: http://foodforbreastcancer.com/foods/saffron